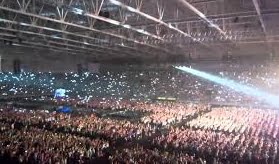 Telenor Arena or sometimes just referred to as Fornebu Arena is an indoor stadium which is located near Oslo (only 10 km from the centre of the city), at Fornebu in Bærum.

This indoor arena gives home to multiple events including concerts, shows, exhibitions, family and television shows and various sports events as well. The arena hosted the Eurovision Song Contest in 2010 and it hosted major concerts as well such as the AC/DC and its Black Ice World Tour, Tina Turner and her 50th Anniversary Tour, Andrea Bocelli, Madonna and her The MDNA Tour, Metallica and its World Magnetic Tour, Iron Maiden and its The Final Frontier World Tour, Kylie Minogue and her Kiss Me Once Tour and so on. The other stadium in Norway which is also located in Oslo is the Oslo Spektrum which also gives home to several events.

The Telenor Arena opened in 2009 with the Norwegian football season and it was the replacement of Nadderud Stadion. Telenor Arena has the capacity for 15,000 visitors for sport events and it has 23,000 for concerts. The Telenor Arena cost 585 million Norwegian kroner to build which is around 65 million euros.