Holmenkollen is famous around the world for the ski-jumping arena which has hosted competitions since the end of the 19th century. Recently (2008) the ski  jump was taken away and a new ski jump has recently been opened (March 2010). This ski jump will hopefully bring just as much fun and joy to both participants and viewers as its predecessor.

The Holmenkollen ski jump arena is annully visited by around 1 million people. 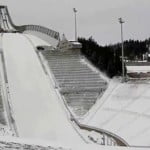 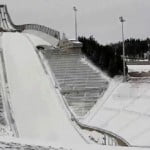