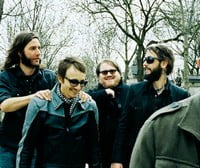 Band of Horses, previously known as Horses, is an American rock band formed in 2004 in Seattle by Ben Bridwell. The band’s current lineup features Bridwell, Ryan Monroe, Tyler Ramsey, Bill Reynolds, and Creighton Barrett. In February 2011 the band will come and perform in the inner city concert venue in Oslo, but still very big, Oslo Spektrum, and there are still tickets available for this concert if you use the link on this page to grab hold of them. Check out this great Oslo concert if you are interested in Band of Horses.