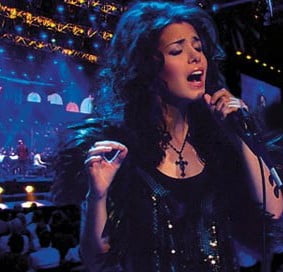 Katie Melua will come to Oslo May 20th and she will impress the audience with her beautiful voice and her beautiful look. The concert venue which will host this great concert is Oslo Spektrum, so prepare for a crowded venue and a great atmosphere as this diva enters the stage. If you would like to be there at this Oslo concert, tickets can be bought from WorldTicketShop. Katie Melua will also perform in Amsterdam in May 2011.

More about Katie Melua (source: Wikipedia)
Did you know that Ketevan “Katie” Melua was born 16th of September in 1984 and she is a Georgian-British singer, songwriter and musician. She moved to Northern Ireland at the age of eight and then to England at fourteen. Melua is signed to the small Dramatico record label, under the management of composer Mike Batt, and made her musical debut in 2003. In 2006, she was the United Kingdom’s bestselling female artist and Europe’s highest selling European female artist.