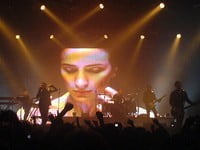 The alternative Swedish rock-band has won several awards and titles in their home country and now they are coming to Oslo Spektrum to impress their beloved neighbours in Norway as well. The band was founded in 1990 and is unfortunately quite unknown outside Scandinavia, but if you like them and would like to be there March 24th, then go for it.